Dr. Joe Pool came to FUMC Rockwall as senior pastor in June 2006.  Joe has served several churches in the North Texas Conference. He has lead three successful building programs, increased worship attendance and mission awareness and involvement. He has led Disciple Bible Study groups and enjoys teaching. He and his wife, Becky, have three children, Candace, Corey, and Amanda.

Julie joined our staff in December, 2021 as Interim Children’s Director. Previously, Julie has served The Village UMC in Nashville, Tennessee, the First UMC of Richardson, Texas and the St. Andrew UMC in Plano, Texas. Julie was commissioned in 2015 and ordained in 2018. Julie is a graduate of TCU in Ft. Worth and The Perkins School of Theology at SMU where she earned her Master of Divinity. Julie is married to Kyle Henson, an accomplished musician, and they have one son, James.

Rev. Larry Gipson has served as our Director of Youth and Family Ministries since June, 2020. He is passionate about helping teens deepen their relationship to Christ through service to our neighbors, conversations with others, and study of the Bible. He has previously served churches in Atlanta and Weymouth, and he served as a Peace Corps volunteer in Ukraine. He is an ordained minister in the United Church of Christ working at First UMC Rockwall under a special arrangement. He is a graduate of Yale University (2011) and Candler School of Theology at Emory University (2017). After three years of long-distance dating, Larry came to Dallas to live in the same city as his beloved, Kelsey, who is pursuing her PhD in the Old Testament at Southern Methodist University. 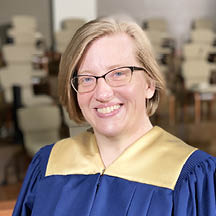 Michelle Corazao joined our staff as Director of Music and Arts in 2021. She received her Bachelor of Music in Music Education with both Choral and Instrumental emphases from Southwestern University in Georgetown, Texas, and her Master of Sacred Music from SMU (Perkins School of Theology and Meadows School of the Arts) in Dallas, Texas. Michelle has served United Methodist churches throughout the North Texas Conference, has taught public school music, and has worked with all ages. She enjoys conducting choirs and enlivening worship through congregational singing and participation. Michelle oversees the Music Ministry of the church and is the conductor of the Chancel Choir and the Youth Choir. Michelle and her husband, Marc, share their home with their son, Ian, and their orange tabby cat tiger, Aslan.

Shirley connects our first time guests and continuing guests to their areas of interest in the church as well as shepherding those desiring to join through the membership process at First UMC Rockwall.  She also works closely with our First Impression Teams.  Shirley is a graduate of Texas A & M and is married to Larry Womack.  They have two sons, Matt and wife, Melissa, Marcus and wife, Alyssa, along with six grandchildren, Abby, Lucy, Clare, Madeleine, Graham, and Jude.

June joined the FUMC Rockwall staff in 1997, and has served churches in Kansas and Texas. She has accompanied groups and soloists throughout the United States. June is married to Bob, has one son, Jason and one granddaughter, Jaden.

Gary has been in key leadership positions at the Lake Highlands UMC in Dallas: Finance, Feed Lake Highlands, Inc. Trustees, Capital Campaigns, and major projects. Gary has served as CFO and Managing Director of several commercial real estate companies and property development groups. Gary is married to Sabrina and they have a daughter, Megan.

Jennifer Potter joined the staff at First UMC Rockwall as Membership Secretary in March 2008. She grew up in Pennsylvania and graduated from Johnson and Wales University in 1989 with a Bachelor’s degree in Hospitality Management. She has one daughter Leahia. Jennifer has been a faithful member of First UMC Rockwall since 2006.

Amy Moore joined the staff at First UMC Rockwall in October 2017. She grew up in Richardson and graduated from Texas Christian University in 2002 with a Bachelor’s degree in Fine Arts. She is married to Travis Moore and have twins, Emily and Luke. The Moore family have been members to First UMC since December 2017.

If you are interested in having a wedding here or have any questions, please contact our Director of Operations, Jennifer Potter, jpotter@fumcrockwall.com

Chris joined the church staff in March 2012. She is a graduated from Boston University with a degree in elementary education, and taught for 9 years at R.Q. Mills Elementary in Dallas. Chris has attended First UMC Rockwall with Neil Conway since 2000. Neil and Chris have two children Seth and Maya.

Amy graduated from Baylor University with a business degree, and was the Assistant to the Children’s Minister at FUMC Rockwall prior to joining The Ark staff. In addition, Amy has served in multiple volunteer capacities in this community, since moving to Heath in 1997. Amy is married to Bob and they have twins, Garrett and Hannah.